I share personal experience with (or opinion of) products with links to purchase through; some of these links are affiliate links (in bold), the commissions of which help fund EV and cost purchasers no extra.

Jay is our resident mushroom farmer… years of experimentation have resulted in techniques perfected and rad. Jay specializes in culturing and growing the gourmet edible and medicinal mushrooms known as Elm Oyster Mushrooms (Hypsizygus ulmarius}, from spore to fruitbody. They are delicious and healthy and we love ’em! We want you to love ’em too.

In nature, all mushrooms begin with a spore. But mushrooms can be cloned in petri dishes. A piece of fruitbody is placed on the petri agar (a gelatinous substance derived from red algae). 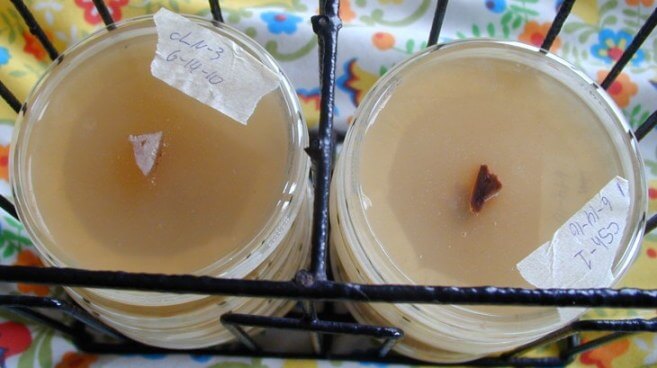 The agar is a nutrient source for the mushroom as it sends out mycelia.

The mycelia are soon completely established on the agar. The agar is then cut up into little pieces and distributed within a jar full of sterilized grains, and the mycelia continue to spread. 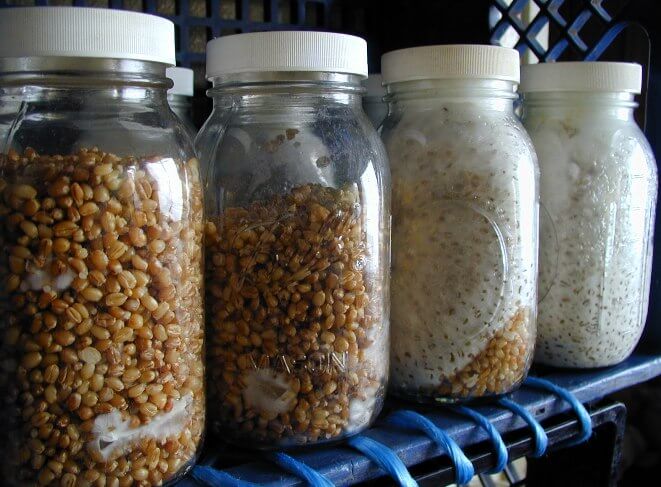 Once the grains are completely taken over by the mycelia, the contents of the jar are broken up into pieces and mixed with a sterilized nutritive substrate that will eventually yield full grown mushrooms. 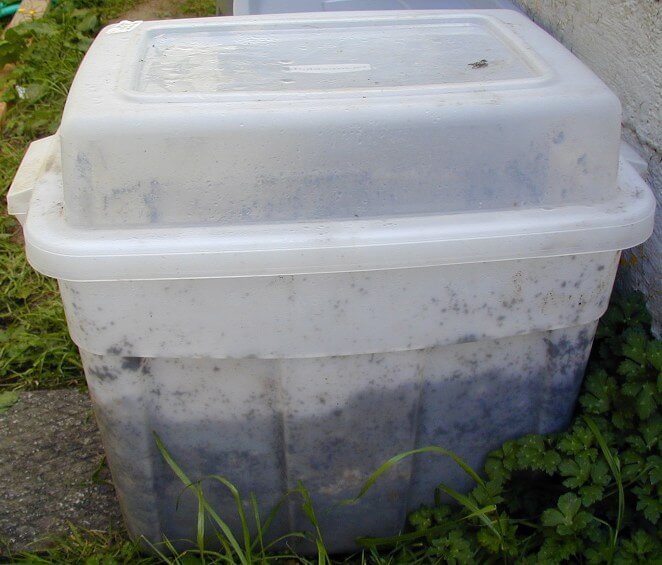 Plastic bins with tight fitting lids are ideal containers for mushroom growing because they are impervious to the elements, retain an airtight seal to keep out pests and other contaminants, maintain high humidity, and allow enough light in for the fruitbodies to develop. The only downside to the plastic bin is that there is no fresh air exchange, so the CO2 buildup is fanned away with the lid about everyday. 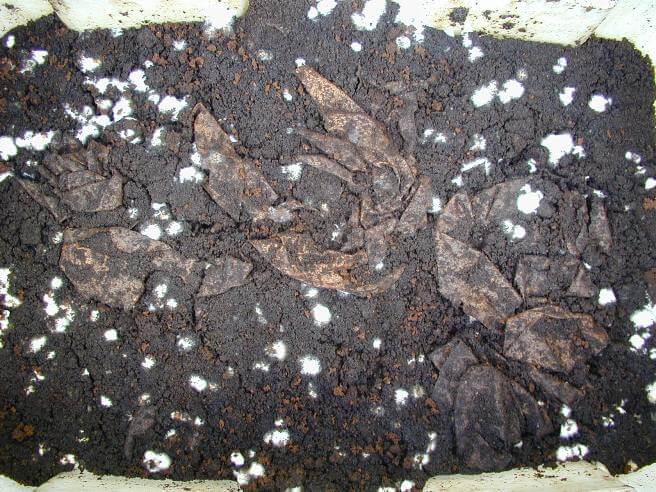 In this bin the substrate is coffee gounds, which come presterilized from the coffee shop. 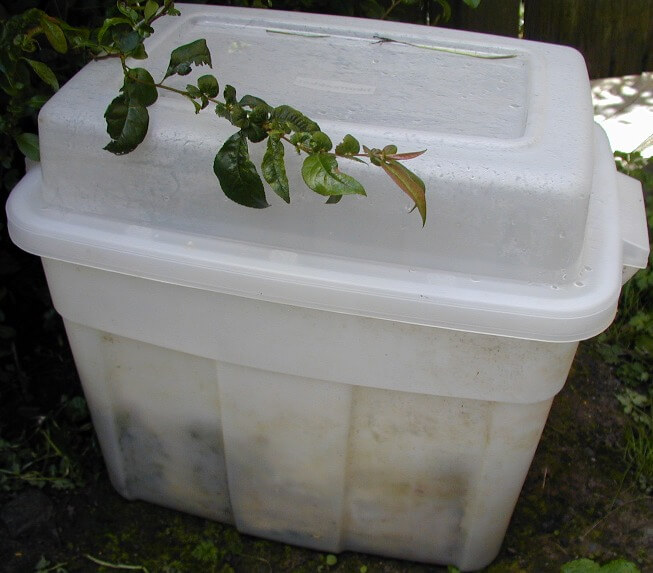 Here you can see, through the side of the plastic bin, that the mycelia have established themselves almost throughout the entirety of the substrate. It won’t be long now before mushrooms begin forming. 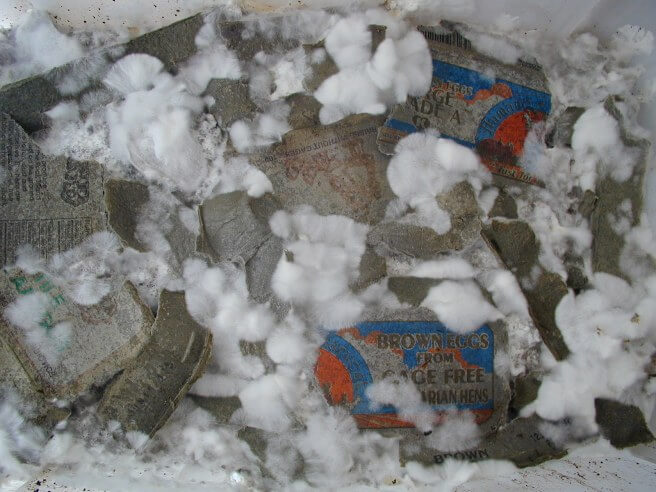 Here we have the mycelia expanding the mushroom realm, devouring all in their path. Underneath the egg cartons are coffee grounds and a year’s worth of my headhair and beard for that extra oomph mushrooms love and so my friends and I can FINALLY eat my hair without gagging on hairballs like we usually do! 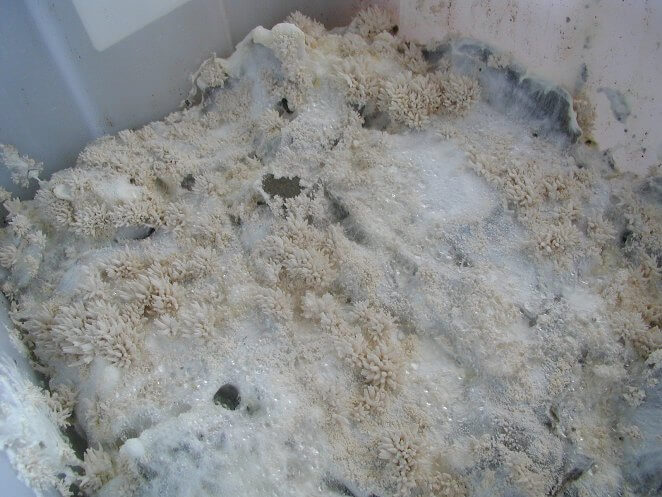 The mycelia are thoroughly established and the primordia are now developing. AWESOME! 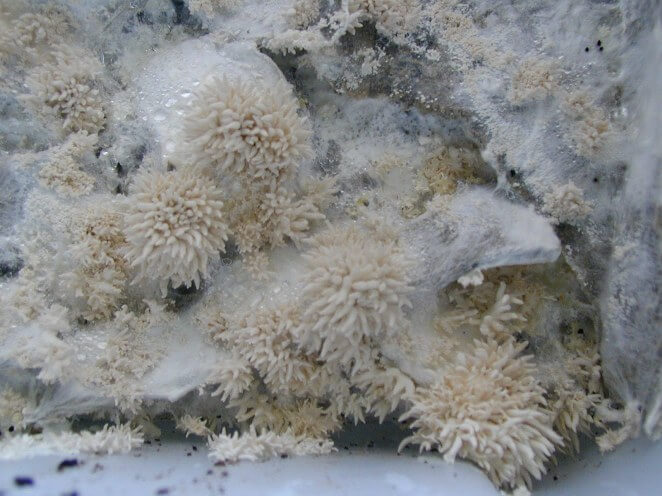 Closeup of the primordia just before they grow caps in order to become mushroom fruitbodies. Aren’t they cute? 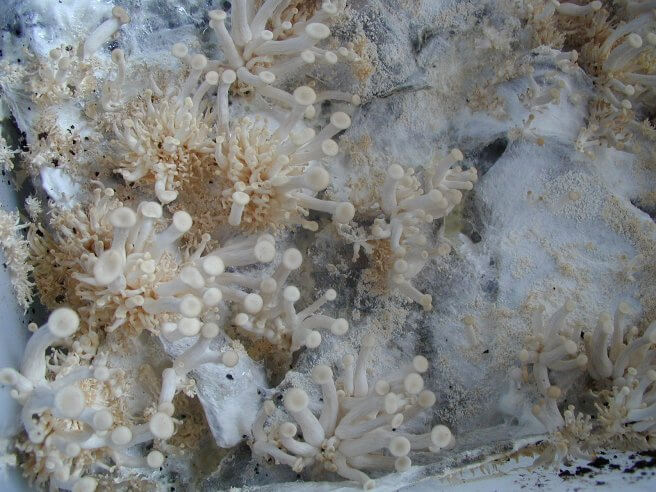 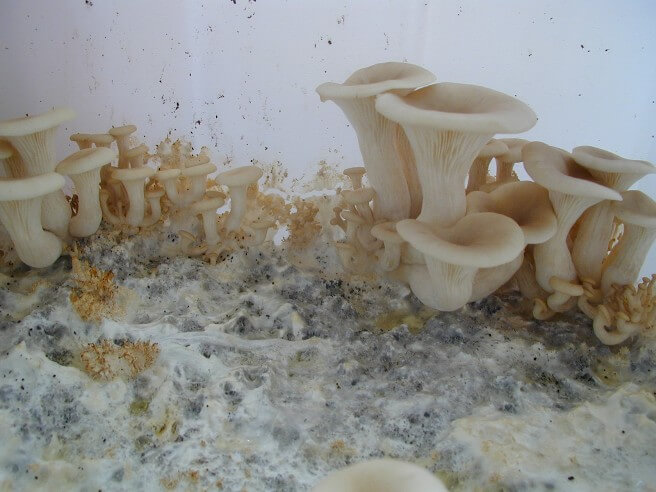 As the primordia begin turning into “full on” mushrooms… rather than compete for nutrient like plants do, many of the smaller primordia dry up and die away so that others may become larger. Mushrooms are very energy efficient in this way. 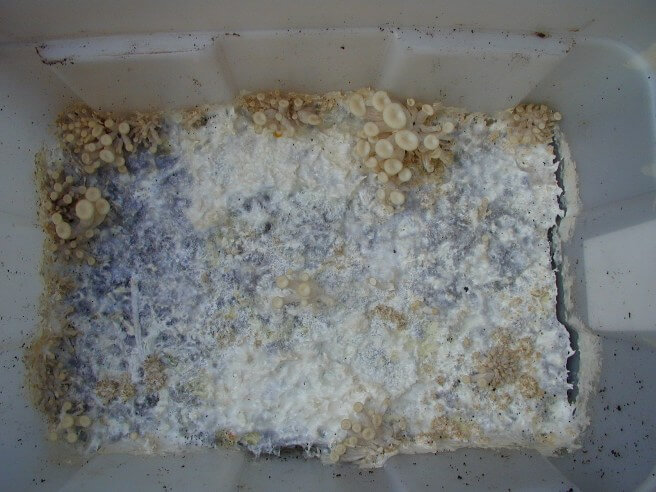 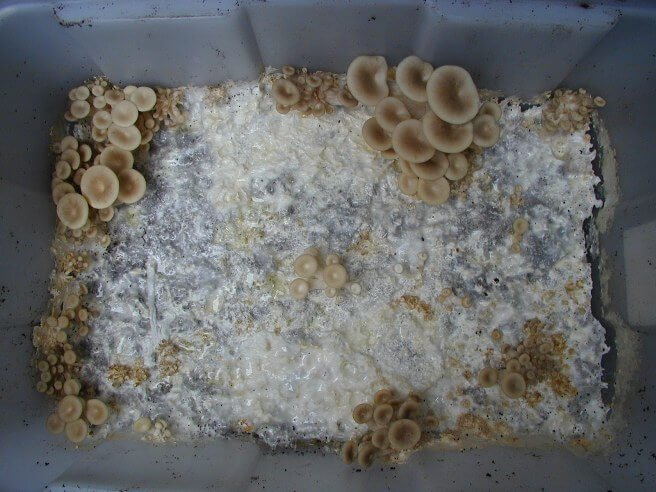 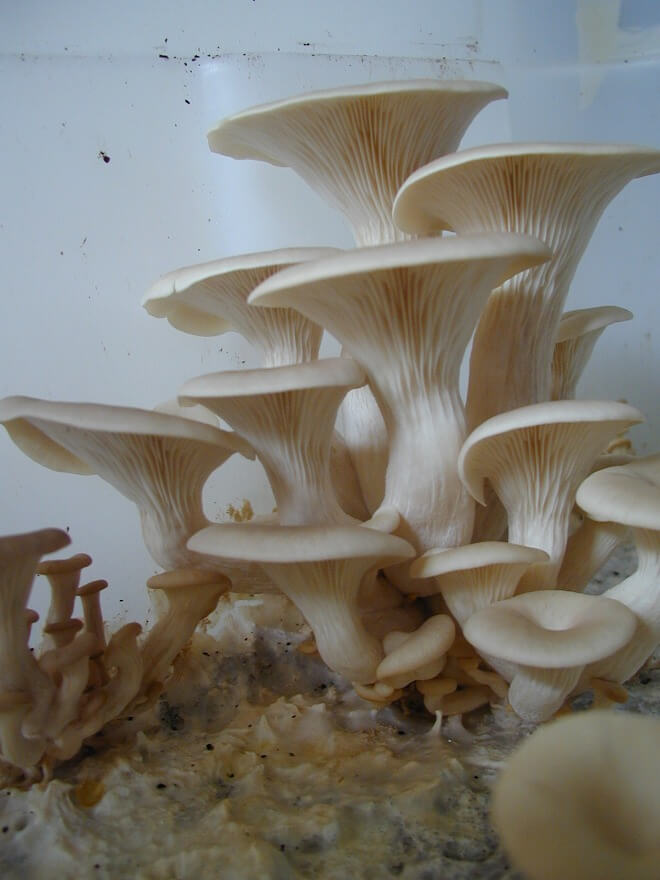 This is what you want… perfect Oysters. BEAUTIFUL! 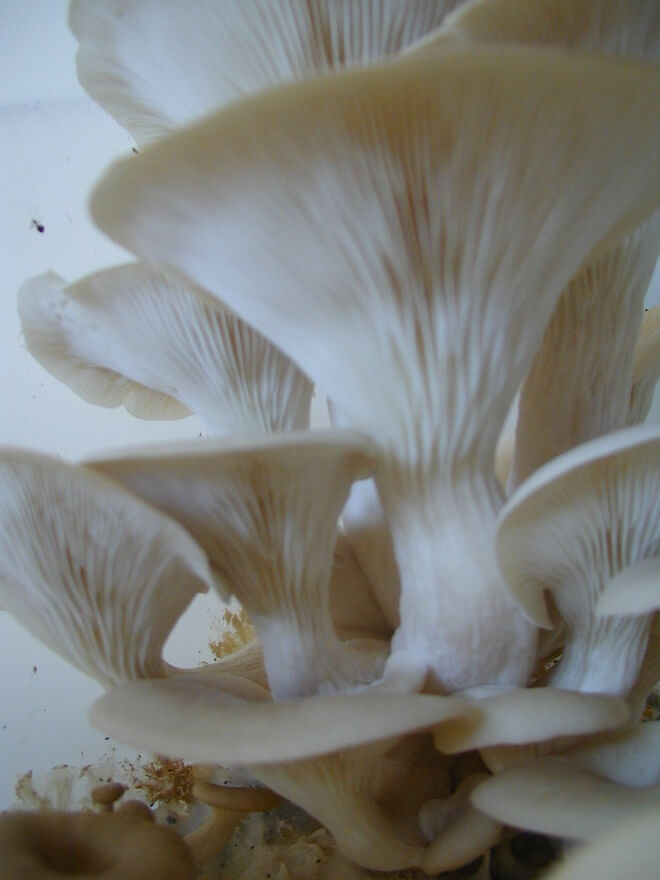 I’m an Oyster Mushroom in your face, now EAT ME! 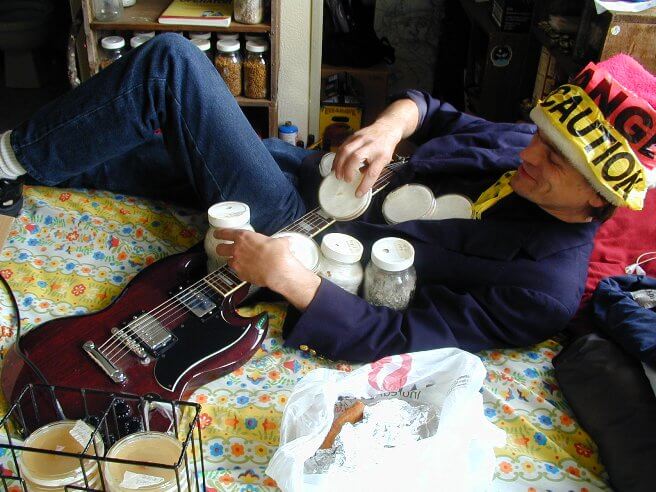 Ahh, Jay the mad genius mushroom farmer in its natural environment. Here it explains how petri dishes can also be used as guitar picks because mushrooms like to make music too!

The following two photos are of a flush of Hypsizygus ulmarius [Elm Oyster Mushroom] that I grew on wood chips (boiled) in my living room in a plastic bin, shown with and without flash. They weigh 1.5 pounds. I picked them and later that day we had some friends over and we brushed Irish herb and garlic butter with extra fresh chopped garlic onto both sides of the mushrooms and barbequed them amongst many other things that we feasted upon… delicious!!! 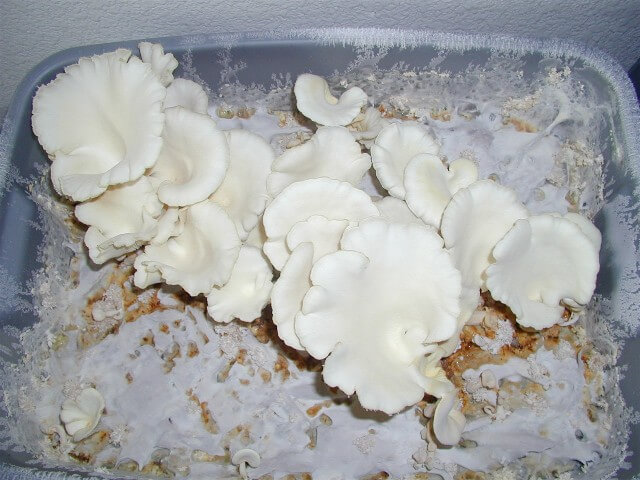 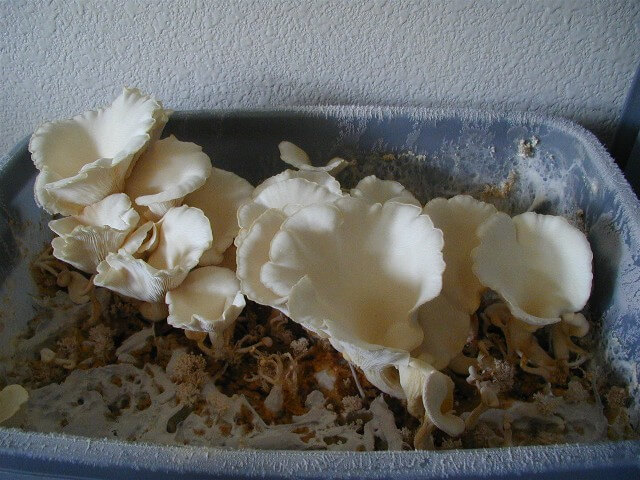 I eventually got 3 more flushes at ~1.5 pounds each and another at less than a pound… it is sitting in between flushes now, and I am expecting more!

If you… like us… are at all seriously interested in growing edible and medicinal mushrooms… get these three books now… seriously:

What is your experience with growing mushrooms… edible or otherwise?

Why The Background Is Not White

White light is full spectrum, meaning it contains equal amounts of the highest intensity red, green, and blue light. Blue light is short wave frequency, and is thus potentially damaging to eyes and overall well-being. Thus, EV’s content background color is an eye friendly cream color low in red and green light, but even lower in blue light. Be additionally protected from the blue light emitted from your e-device by wearing computer glasses.

Authors may share personal experience with (and/or opinion of) products, with links to purchase through; some of these links are affiliate links (always in bold and underlined) which earn commissions that cost purchasers nothing extra and help fund EV. 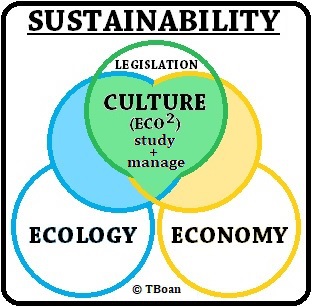 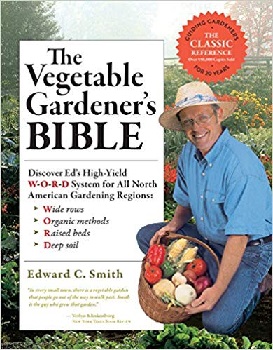 About me… Troy Boylan
Ecoculture Village Founder & President, Anthropology BA, Interdisciplinary Studies: Ethnobotany BS. Two things I think are worth anything at all… all things wilderness and ecoculture… and well, RPGs… and skateboarding!
So, what’s up!?

Amazon Associates Disclosure
“We are a participant in the Amazon Services LLC Associates Program, an affiliate advertising program designed to provide a means for us to earn fees by linking to Amazon.com and affiliated sites.”